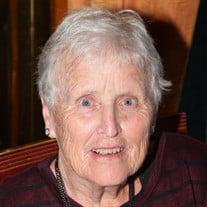 FORT COLLINS – Susan Armstead left this earth surrounded by her family on July 26, 2018 at the too early age of 77 following complications after surgery. Sue was born in 1940 in Indiana, Pennsylvania to the late William and Francis Smith. She attended high school in Gainesville, Georgia, graduating in 1958, then graduated from the University of Tennessee with a bachelor’s degree in Education in 1962. While in Knoxville, Sue was set up on a blind date orchestrated by meddling mothers with fellow UT student and neighbor, Steve Armstead. They were married on December 29, 1962 in Fountain City, Tennessee. Sue and Steve moved to Rochester, NY where Steve worked for the Eastman Kodak Company and Sue taught elementary school. In October of 1963, Sue became a mother with her first of four children. In 1970, after two more children were added to the family and Steve accepted a new position with Kodak in Colorado, the family drove west to live on Terry Lake in Fort Collins. Soon after moving, the family grew again with a fourth child but that didn’t slow down the pace of weekend four-wheeling, dirt biking (yes, Sue had her own dirt bike), and camping adventures in the mountains. Sue’s passions were gardening and developing handmade crafts. Weekends became filled with craft fairs selling Sue’s unique macramé creations. As she expanded her range of craft interests, her developing artistry with dried flower arrangements spurred the desire for more space to grow her own flowers. The family moved to LaPorte in 1984 where she kept horses, sheep, turkeys, chickens, geese, the occasional cow and lots of flowers. Sue was well known for her large gardens that supplied her dried flower arrangements which she sold at craft shows throughout the state. After moving to Grand Lake in 2003, Sue turned to sewing because the soil was too rocky and the seasons too short to supply enough flowers for her dried flower arrangements. Her adventures with needle and thread resulted in quilted moose, Santas, and snowmen. After 10 years of Grand Lake adventures (picture Sue, armed with a tiny broom, chasing a huge bull moose away from her aspen), a desire to travel more prompted Steve and Sue to return to the shores of Terry Lake. Her joys in life came with the time she spent with her grandkids, playing bridge and mahjong with friends, tending to her gardens, paddling around Terry Lake, and going on train and cruise ship adventures with Steve. If a day included time spent nurturing plants to share their finest blooms; getting muddy with grandkids; paddling across both familiar and uncharted waters; and making time for family, friends and neighbors, then it was a day worthy of Sue’s life. She lived every day to it’s fullest, and her twinkling eyes, indomitable spirit, and pure love of life will be missed by all that knew her. Sue was a member of the First Presbyterian Church of Fort Collins. She is survived by her husband, Steve and her four children, Bill Armstead and wife Maretta of Fort Collins, Steve Armstead and fiancée’ Julie Oelman of Berthoud, Debbie Lippert and husband Tim of Fort Collins and Kristin Mortenson and husband Colt of Craig, and her 11 grandchildren: Bryan-James (Caitlin), Troy-Michael (Hannah), Lauren, Weatherly-Ann, Calvin, Jacob, Wyatt, Ryan, Noah, Tsegereda, and Rodas. She is also survived by her sisters Marilyn Zima of Arkansas and Deborah Davis of North Carolina. Sue’s parents and brother Jon Smith preceded her in death. A celebration of her life will be held on August 18th at 9:30 a.m. in an outdoor space adjacent to Steve and Sue’s residence at 3604 Terry Point Drive. All friends of Sue are welcome to join the family as we pay honor to the incredible woman that was wife, mother, Nana, and friend. In lieu of flowers, Sue asked that donations be made to the Larimer County Humane Society.

FORT COLLINS &#8211; Susan Armstead left this earth surrounded by her family on July 26, 2018 at the too early age of 77 following complications after surgery. Sue was born in 1940 in Indiana, Pennsylvania to the late William and Francis Smith.... View Obituary & Service Information

The family of Susan Smith Armstead created this Life Tributes page to make it easy to share your memories.

FORT COLLINS – Susan Armstead left this earth surrounded by her...