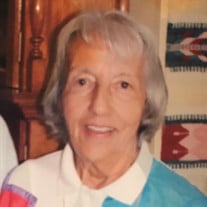 Sylvia Stella Irlando Baker was born on July 25, 1926, and died on April 19, 2019, at the age of 92. Sylvia was preceded in death by her loving parents, John and Lucy Irlando; her brother, Bill Irlando; her husband, Harvey Lockwood Baker; and her son, Joseph Dean Baker. She is survived by her brother, Arthur Irlando; her son John Baker; her daughter-in-law, Lisa LaRue-Baker; her daughter, Teresa Baker Stockley (Bob Biggio); and son-in-law, Wayne Stockley. Sylvia was the proud grandmother of six grandchildren: Joseph Dean Baker, Sarah Baker Veith (Tony Veith), Emily Skrocki (Drew Skrocki), John Stockley (Emily Holcomb), Adam Stockley, and Natalie Stockley (Kraig Burleson); as well as three great-grandchildren: Marley Baker, AJ Veith, and Macy Veith. Sylvia started her life in San Luis, the oldest town in Colorado. Her father was from Italy and her mother was a Colorado native. The family lived on a chicken farm, and Sylvia’s parents were the first people in her town to own a car! At the age of 18, she had a job as a hat check girl at a roller rink in Denver. One day, Harvey, a WWII belly gunner soldier, walked into the roller rink and their love story began. Her only complaint was that he couldn’t skate backwards, so she had to lead. Sylvia and her husband, Harvey, had a love story that was beautiful! They were married for 73 years and their love for each other was obvious to anyone who knew them. They were married in Denver, and later moved to Billings, Montana to start their life together with their young son Dean. They enjoyed many years in Billings while adding John and Teresa to their family. She was a wonderful mom and loved her children with all her heart. Life brought them back to Colorado where Sylvia planted roots in Broomfield. Sylvia lead a full life. She enjoyed playing tennis and had a great lob shot! She had many dear, lifelong friends from both Nativity of Our Lord in Broomfield and Saint Joseph Catholic Church in Fort Collins. Her tennis friends in Broomfield and Fort Collins meant the world to her. She enjoyed and loved them all so very much! Harvey and Sylvia moved to Fort Collins, Colorado in 1994, to be closer to their grandchildren. They were active grandparents and enjoyed spending time nurturing and helping with their grandchildren. Sylvia remained active within her church community throughout her life. She enjoyed singing and had keen musical talent. She will be remembered as a kind, caring and compassionate woman who devoted her life to the service of others. Recitation of the Rosary will be held at 6:00 pm, Thursday, May 2, 2019 at St. Joseph Catholic Church. Mass of Christian Burial at 2:00 pm, Friday, May 3, 2019, also at St. Joseph Catholic Church.

Sylvia Stella Irlando Baker was born on July 25, 1926, and died on April 19, 2019, at the age of 92. Sylvia was preceded in death by her loving parents, John and Lucy Irlando; her brother, Bill Irlando; her husband, Harvey Lockwood Baker; and... View Obituary & Service Information

The family of Sylvia Stella Baker created this Life Tributes page to make it easy to share your memories.