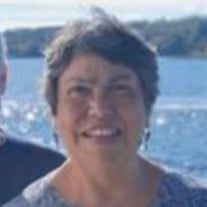 Sylvia Garcia, 63, of Fort Collins, died January 3, 2021. Sylvia was born February 10, 1957 in Chicago, Illinois to parents Juan and Agustina Garcia. She grew up there in Chicago and later made her home in Fort Collins, Colorado. Family was important to Sylvia – she was the “little sister”, the youngest of seven children. She was a bright, fun child who loved her family. After her father died when she was a teen, she then became her mother’s companion, friend, and caregiver. She was also a fantastic aunt who took her nieces and nephews on adventures, giving them experiences they will always remember. Education was important to Sylvia – She received her Bachelor’s Degree from Loyola University, then moved to Fort Collins to attend CSU, where she earned her Master’s Degree in Occupational Therapy. Her second Master’s in Library Science followed, from the University of Alabama. While at CSU, she received one of the first awards given for students in Women’s Studies. Love was important to Sylvia – It was in Fort Collins that Sylvia made her home and where in 1995 she met Alice Jorgensen. The two of them were married two years later in 1997. Sylvia loved and cared for Alice deeply. Together, they were godparents to Ethan, the son of their two best friends. Alice and Ethan were at Sylvia’s bedside holding her hand as she took her final journey from this life. Learning was important to Sylvia – her own and that of others. She taught her nieces and nephews the values of her family, and she continued to look for new things to learn herself, often “threatening” to go back to school. People were important to Sylvia – Alice, Ethan, her sisters and brothers, her nieces and nephews, and the people of her community. As the Outreach Librarian at the Poudre River Public Library, it was her mission to help those who were disadvantaged and disenfranchised. She created and led programs for individuals who were homebound, people experiencing homelessness, those with dementia and their families, folks with disabilities, as well as many other often overlooked groups. She had a way of making people of all ages feel at ease around her. Sylvia loved going to the theater to enjoy dance, music, and performances of all kinds. She had a creative and inquisitive mind, and found others to share in her interests, like those who joined her “Book Club for Mortals” at the library. She found so much joy in this group and the discussions they shared. Sylvia had a great sense of humor and we will so miss her smile and her delightful laugh. A service for Sylvia will be planned at a later date when it is safe to gather. For now, please share your memories of her, read a book and think of her, or donate in her memory to the Poudre River Public Library District to continue her legacy.

Sylvia Garcia, 63, of Fort Collins, died January 3, 2021. Sylvia was born February 10, 1957 in Chicago, Illinois to parents Juan and Agustina Garcia. She grew up there in Chicago and later made her home in Fort Collins, Colorado. Family was... View Obituary & Service Information

The family of Sylvia Garcia created this Life Tributes page to make it easy to share your memories.