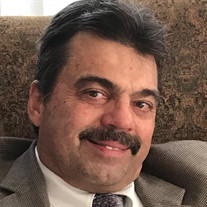 Thomas Michael Gaucher (Tom), 63, of Fort Collins, CO, died unexpectedly on Oct. 17th, 2019 after a five year courageous battle against multiple myeloma, a blood cancer. He fought a good fight and always with a positive outlook on life. Tom was born at Burtonwood AFB, England to Clara and Bob Gaucher in 1956. As the oldest of 6 in an Air Force family, he lived in Mississippi, Alabama, Delaware, California, Texas, North Dakota, South Dakota, before the family settled in Fort Collins in 1974 upon his dad’s retiring. Tom attended college in Arizona followed by a tour of duty in the Air Force. Tom and his first wife Terry Schroeder welcomed son Marshall into the world in 1988 in Denver. While there, he was employed by Martin Marietta as a test analysis engineer for the Manned Maneuver Unit used by NASA and worked on the Venus Radar unit. He later worked with his father operating Bg Software, developing custom software to meet individual business needs. He also worked various sales jobs and worked as a financial advisor for the last 20+ years. Tom met Nancy in 1997 and they were married in 2003. He also gained Connor as a bonus son. He was a big sports fan, especially hockey. Besides playing hockey while living in the frigid Dakotas, he enjoyed coaching Marshall and his hockey teams in Denver. He loved relaxing on our back deck at Horsetooth Reservoir and listening to his music while watching the deer, working in the yard, fishing, target shooting with his boys, and watching old Westerns over and over. He especially loved being playful and silly with his great-nieces Riley and Paige. No matter the situation, appropriate or not, Tom had a knack for making people laugh and putting a smile on their face. He was a man of deep faith, and was always praying and worrying about other souls. Tom is survived by his mother Clara Gaucher (Fort Collins), wife Nancy Gaucher (Fort Collins), son Marshall and wife Ashley Gaucher (Eugene, OR), and step-son Connor McDonald (Boise, ID). His sisters Eileen Walker (Danny) (Fort Collins), and Rose Gaucher (Olalla, WA), his brother Steve Gaucher (Seattle, WA) and sister-in-law Tammy Gaucher (Wellington, CO) and several nieces and nephews, great-nieces and great-nephews, aunts, uncles, cousins, and Nancy’s large family. He was predeceased by his father Robert Gaucher, and brothers Brian Gaucher and Paul Gaucher, and nephew Nicolas Gaucher. Also his beloved dog, Pete. We’d like to thank all of Tom’s doctors and nurses for their dedicated care and support, our awesome families and friends for all of the wonderful love and support we all received during this journey. Keep your loved ones close to your heart. Hugs keep them even closer. Memorial donations may be made in Tom's name to UC Health Harmony Cancer Center, c/o Goes Funeral Care, 3665 Canal Dr. Suite E., Fort Collins, CO 80524.

The family of Thomas Michael Gaucher created this Life Tributes page to make it easy to share your memories.