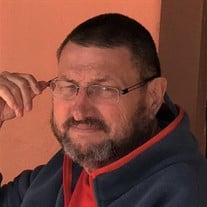 Thomas John Peterson, 67 died peacefully in Fort Collins, Colorado early on June 22, 2017 after the shortest night of the year. Tom suffered a 2-year ordeal with brain cancer with unfailing humor and the constant support of family and friends. We are also very grateful for the care he received from many, especially those in the last days including Dr. Jameel Chohan and the Pathways Hospice nurses and music therapist. A memorial service will be held at First United Methodist Church of Fort Collins on Friday July 21 at 11am. Tom was born in Windom, Minnesota on October 12, 1949 to Raymond and Ruth Jayne Silliman Peterson who were freshly returned to their hometown from an overseas tour with the US Air Force in Guam. Tom lamented that he was 3 days shy of being born aboard a military vessel. Both Tom and his mother were delivered by the same doctor. Having an Air Force Captain father and a kindergarten teacher mother, he and his younger sister Mary were raised all around the United States--most notably in Hawai’i, Minnesota and upstate New York. Growing up and throughout his life Tom was an avid reader. He attended SUNY Albany where he graduated in 1971 with a bachelor’s degree in political science and a minor in African American studies. He later earned a master’s degree in urban planning at Rutgers University. In 1982, after working as a city planner for several years in New Jersey, Tom made his way to the last frontier--Alaska—to become the Planning Director for the capital city, Juneau. It was there that he met his wife, an attorney, Laura Davis. They were married in Park Rapids, Minnesota on September 20, 1986. Tom had already left Alaska in the spring of 1986 to accept the position of Planning Director for the City of Fort Collins. Tom loved his profession as an urban planner (AICP) and also enjoyed his professional association, the American Planning Association, which he served as president of three state chapters: New Jersey, Alaska, and Colorado. This led to lifelong friendships throughout the country. Having both moved throughout childhood in military families, Tom and Laura loved raising their three children in Fort Collins. Erik was born in 1987, Scott in 1990, and Abigail in 1995. Tom was proud of having helped guide the development of Fort Collins as a city of neighborhoods, where people work, live and play. He pushed for the city to allow outdoor dining on the sidewalks without cost to the restaurants, and to allow free 2 hour parking downtown to promote access to shopping and dining. He pushed for expansion of the rails to trails network for bicycles. He promoted development as well as livability. Tom joined the Rotary Club of Fort Collins in that period, often saying he waited to do so until women were included as members. Tom continued to be active in Rotary through 2017, serving on their program committee and charitable activities. He also volunteered annually with the Boy Scouts to help educate Scouts about civics. He served as chair of the Poudre River Library Trust, and was a member of the Larimer County Board of Adjustment, until his illness prevented full participation. Tom left bureaucracy in 1994 and joined a small commercial real estate firm, then called Blackfox, later Stanford Real Estate, to spend the remainder of his career as a commercial real estate broker, water broker, and land use consultant with expertise in oil and gas issues. He also took management responsibility for family farms in the vicinity of Windom, Minnesota. Outside his professional life, Tom will be remembered as a vivid storyteller, caring father, husband and friend. Tom encouraged critical thinking in those around him by challenging their assumptions and easy ways of thinking. Tom’s dry wit and intelligent humor served him well throughout life. In addition to reading, especially military history and science fiction, Tom loved to travel, make puns, collect stamps, tell jokes, and was always eager to get the mail. Words cannot adequately describe how much Tom meant to his family, friends, colleagues and many acquaintances. Tom is survived by Laura Davis, his wife of 30 years, his children Erik, Scott and Abigail Peterson, his sister Mary Peterson Moore, her husband Tom and son Tim, numerous cousins throughout the US and Canada, and former exchange student “Belgian daughter” Valerie Muspratt Gross, her husband Jeremy and daughters Sierra and newborn Soline (born June 24, 2017). In lieu of flowers, please remember Tom with gifts to the Poudre River Library Trust, the Fort Collins Rotary Foundation or First United Methodist Church of Fort Collins.

Thomas John Peterson, 67 died peacefully in Fort Collins, Colorado early on June 22, 2017 after the shortest night of the year. Tom suffered a 2-year ordeal with brain cancer with unfailing humor and the constant support of family and friends.... View Obituary & Service Information

The family of Thomas John Peterson created this Life Tributes page to make it easy to share your memories.