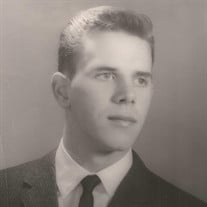 Thomas Welch, 79, of Fort Collins passed away in the early hours of January 15 after suffering a stroke. Born to Robert and Eleanor Welch on February 28, 1941, he served in the Air Force at Lowry Air Force Base in Denver, where he met Chloe Wolf, and Schilling Air Force Base in Salina, Kansas from 1960 to 1964 before pursuing his education. Tom and Chloe were to reunite some forty years later. Tom graduated from Grove City College in 1967 with a degree in business administration. He also attended Stonier Graduate School of Banking at Rutgers University. He spent the majority of his working years in banking, chiefly at Mellon Bank. In the year 2000, Tom and Chloe reunited and were married. Tom continued to work in banking for a short time before retiring. He then worked part-time at Ace Hardware, though for some reason all that tool, paint, and hardware knowledge did not seem to transfer to handyman abilities at home. Weird. In 2010 Tom and Chloe purchased a small home in Green Valley, AZ, where they wintered until Tom’s failing health prevented them from traveling there. They both volunteered at Paws Patrol, a feral cat rescue organization and at the Food Bank of Southern Arizona. Tom was a gentle soul and quiet man. He came to love Chloe’s family and friends, just as Chloe did his. He loved reading good novels and loved people. He and Chloe traveled to Mexico almost yearly with niece Cathy and her husband John until the onset of a variety of health issues, starting with a broken hip. He was determined to get stronger. The surgeon who repaired the hip said he was unlikely to every walk without a cane, but he did, a testament to his quiet strength. Tom is survived by wife Chloe Wolf and her family, sons Robert (Sarah) and Tom (Eileen) from a previous marriage, granddaughters Natalie and Leah, brothers Doug and Bill, six nephews and nieces, and many wonderful friends and neighbors. Rest in peace, Tom. You have earned it. You are and will be sorely missed. No service will be held at this time. Donations in Tom’s name may be made to the Community Food Bank Green Valley, 250 E. Continental Road, Green Valley, AZ 85614 or online at https://donate.communityfoodbank.org/give/111894/#!/donation/checkout. Please indicate in comment box that you would like donation to go to the Green Valley Food Bank, IMO (in memory of) Thomas Welch. Donations may also be made to ASPCA. Go to their official site and select memorial donations.

Thomas Welch, 79, of Fort Collins passed away in the early hours of January 15 after suffering a stroke. Born to Robert and Eleanor Welch on February 28, 1941, he served in the Air Force at Lowry Air Force Base in Denver, where he met Chloe... View Obituary & Service Information

The family of Thomas Courtney Welch created this Life Tributes page to make it easy to share your memories.

Thomas Welch, 79, of Fort Collins passed away in the early hours...