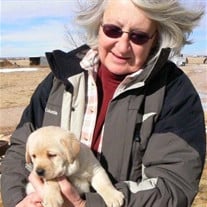 Vineta Ieva (Svuksts) Troendle Vineta was born the daughter of Vilis and Erika Svuksts in Riga, Latvia on July 20, 1942. She passed away peacefully on April 7, 2017 with family by her side. Following WWII, her family immigrated to the United States where she grew up in Brooklyn, New York and later she earned her degree in Forest Genetics at the New Your State College of Forestry at Syracuse University. While in college, she met her husband of 51 years, Charles Troendle. In 1966 they were married and moved to Parsons, West Virginia where she taught in the Head Start Program and later she taught 10th grade Biology in the Parsons High School. While in West Virginia, she had two daughters, Kathryn and Karin. In 1977 the family moved to Fort Collins, Colorado. Initially, she was a stay-at-home mom, raising her two girls and caring for the many Appaloosa horses the family owned and showed over the years. She kept busy hauling the girls to horse shows, 4-H meetings and other after school activities. As the girls got older, she returned to her love of teaching. For over 20 years she taught or assisted in teaching English as a second language in the Poudre R-1 School District and retired early in 2000. At that time, she and Charles purchased a farm near Scottsbluff, Nebraska where they raised hay. Although they continued to reside in Fort Collins, Vineta contributed to the day-to-day activities on the farm while they still maintained the horse farm in Fort Collins. Vineta was a loving wife, mother and "auntie," who was always there to help. She loved her numerous house plants, garden, dogs, cats and horses. She will be sorely missed, but never forgotten. Vineta is survived by her husband, Charles and two daughters, Karin Marie Troendle of Fort Collins, Colorado and Kathryn Ann (Ryan) Erickson of Moriarty, New Mexico. She has two sisters and their families, including numerous nieces and nephews. In lieu of flowers, the family prefers a donation be made in her name to Lutheran Family Services Rocky Mountains (www.lfsrm.org); 2032 Lowe Street, Suite 200, Fort Collins, CO 80525. Interment will be private.

Vineta Ieva (Svuksts) Troendle Vineta was born the daughter of Vilis and Erika Svuksts in Riga, Latvia on July 20, 1942. She passed away peacefully on April 7, 2017 with family by her side. Following WWII, her family immigrated to the United... View Obituary & Service Information

The family of Vineta Ieva Troendle created this Life Tributes page to make it easy to share your memories.

Vineta was born the daughter...