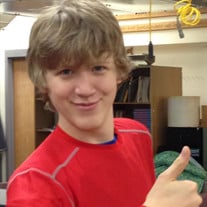 Wesley Alan Strunk, 17 of Fort Collins, Colorado died in a car accident on Saturday, June 24, 2017. His family and the community have since been grieving his loss and remembering Wes; his smile and a spirit that was so full of life. Wes was born on December 20, 1999 in Port Huron, Michigan to Kenny and Amy Strunk. As the youngest in his family, Wes added new joy and laughter to the Strunk home. Wes is known for his big heart and his goofy and imaginative personality. He had the marvelous ability to fit in, no matter the crowd. Wes enjoyed being with his brothers, whether riding dirt bikes, four wheeling, or snowboarding, and he’s a gamer. Wes is a musician; playing trumpet and tuba in the Poudre High School Band, in addition to learning guitar and banjo. Wes and his friends formed a band called the B-Flats in middle school. He was always trying something different. Wes is passionate about physics, was part of Odyssey of the Mind Program, and participated in the Robotics Club. He was also recommended, applied for and was accepted to the STEM Program. During his studies with STEM, Wes was able to talk to the International Space Station, 249 miles away from Earth. Wes planned to become a Mechanical Engineer. He used his knowledge to build his own drone. Learning about the German culture and language became a part of him; cooking German food and listening to German rock music. He planned to explore Germany after graduation. Wes truly was a Renaissance Young Man. Wesley is survived by his parents, Ken and Amy Strunk; his sister, Ashley (Neil) Hosford; older brothers, Kenneth and Kyle; nephew, Luke; nieces, Emma and Anna and soon to be born, baby nephew. He will be loved and missed by numerous family, friends, teachers, and his beloved Siamese Cat, Erza. A memorial service and celebration of Wes' life was held Saturday, July 1st at 3:00 PM at the Vineyard Church of the Rockies, 1201 Riverside Avenue, Fort Collins. A memorial service is planned for 4:00 PM, Saturday, July 8th, 58750 Place Road, Lenox Township, Michigan. Wes' family requests that any memorial donations please be made to the Wes Strunk memorial fund at Vineyard Church in care of Goes Funeral Care, 3665 Canal Drive, Suite E, Fort Collins, CO 80524.

Wesley Alan Strunk, 17 of Fort Collins, Colorado died in a car accident on Saturday, June 24, 2017. His family and the community have since been grieving his loss and remembering Wes; his smile and a spirit that was so full of life. Wes was... View Obituary & Service Information

The family of Wesley Alan Strunk created this Life Tributes page to make it easy to share your memories.