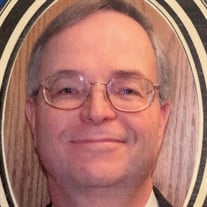 William David (Dave) Barber, after living a life of devotion and service, was welcomed by his parents and family in heaven 10 April, 2020. Dave was born to William and Vera Barber in Sault Ste. Marie, Ontario, Canada. He had an active childhood that included many summers at the lake cottage on Lake Superior with his sister, Mary, and childhood friends. He graduated from high school and later married his wife, Gail, in 1975. Dave graduated from the University of Western Ontario in London, Ontario with a B.A. Honors degree in Geography in 1975 and attended Carleton University in Ottawa where he earned a Master’s degree in Geography in 1977. After graduation, he moved to Alberta where he worked as a Senior Planner in Edmonton from 1977-1990 and as a Manager of Planning Services for Parkland County from 1990-1996. He later moved to Grand Island, Nebraska and worked as a Planning Director from 1996-1999 and finished his career in Wichita, Kansas where he worked 18 years as a land use supervisor before retiring in 2017. As a city planner, Dave was a member of the Canadian and American Planning Associations and received multiple awards including the Award for Creativity and Excellence, Alberta Association, Canadian Institute of Planners (1989); District Representative, Nebraska Planning and Zoning Administrators Association (1997-1999); Governor’s Appointment, Nebraska State Comprehensive Facilities Planning Committee (1998-1999); Sedgwick County Commission Chairman’s Award (2001); and Kansas APA Chapter Award for the Central Northeast Area Plan Update (2007). Dave’s colleagues always respected him for his high values and honesty both as a planning professional and man. Dave also served his religious community faithfully. He served for 48 years in various capacities for The Church of Jesus Christ of Latter-day Saints, including Ward Clerk, Stake Mission President, Stake High Councilor, and many positions in the Elders Quorum presidency, including Elders Quorum President. He also served in multiple Bishoprics and as a Bishop from 2002-2006. Dave enjoyed cruising with his wife and sister-in-law (Jennifer) and brother-in-law (Steve), and exploring Europe with his daughter Laura and her family. He also loved traveling to Canada with Sarah and her family to celebrate special family occasions. Music, food, and sports were some of Dave’s many hobbies. He enjoyed playing and learning new songs on the guitar and listening to his favorite bands and artists. Dave loved to spend time in the kitchen perfecting recipes and experimenting with new ingredients. His grandkids especially loved Grandpa’s spaghetti sauce and meatballs. Dave loved to ski and played hockey. He also enjoyed watching hockey and football games. Dave was fond of gardening and house projects. He always brought a level of quality and precision to his work. He spent his retirement life in Fort Collins, Colorado, exploring new hobbies including fly fishing. Fort Collins also provided the opportunity for Dave to attend and serve in the temple which he loved. He was a loving husband to Gail, devoted father to Sarah (Stephenson) Beck and Laura (Robert) Weight, and doting grandfather to Joshua and Whitney Beck and Benjamin, Vera, Samuel, and Emma Weight. Dave was well-loved by his sister Mary (John) Doan, his sister-in-law Jennifer (Steven) Thibodeau, and brother-in-law John (Terry Lynne) Sidwell as well as many nieces and nephews in Canada. Dave was a great man who fashioned his life after the Savior. He touched the lives of both family and friends. His legacy has been imprinted in each of them with his example of service and love. We know through the example of his faith that the gospel of Jesus Christ is an eternally binding force, that families are forever, and we will be with him again someday.

William David (Dave) Barber, after living a life of devotion and service, was welcomed by his parents and family in heaven 10 April, 2020. Dave was born to William and Vera Barber in Sault Ste. Marie, Ontario, Canada. He had an active childhood... View Obituary & Service Information

The family of William David Barber created this Life Tributes page to make it easy to share your memories.

William David (Dave) Barber, after living a life of devotion...