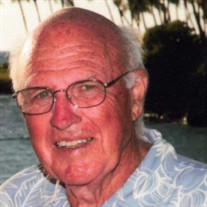 William Graham Lauer, 89, passed away June 23rd, 2020. Known as Bill to his friends, and ‘Popi’ to his family, he was simply, the best man you could ever meet. Patient, caring, funny, honest, and filled with integrity – he loved his family, his country, his faith, and all that life offered. Though deeply missed now, he leaves a lasting legacy that exemplifies how high to aim in life and how to treat others. Bill was born in Fort Collins, Colorado – a Fifth Generation Native – a true Colorado man. He was the ultimate fan of his Alma Mater, Colorado State University, where he received his degree in Civil Engineering and was a member of the Sigma Chi Fraternity. He also met the love of his life, Janie Johnson, whom he married in 1954. He served as a 1st Lieutenant of the U. S. Army in Germany from 1954 to 1956, then returned to Colorado to raise his family and to enjoy a remarkable, long career paving roads all over the region. During the course of his life, he held many notable positions, including President of the Colorado Contractors Association, President of the Fort Collins Chamber of Commerce, President of the Asphalt Paving Committee, Chairman of the Associated General Contractors of America, Past President of McAtee Paving and President of Sterling Companies. He then achieved the certification as a Registered Engineer. He was awarded Contractor of the Year by the CCA and inducted into the Hall of Fame by CAPA. He also was on the CAPA Legislative Committee, the Planning Commission of the City of Greeley, and was an engineer for the Colorado Department of Highways. Additionally, Bill served on the board of the Fort Collins County Club, The Adriel Hills Homeowners Association, and was a member of the Elks Club, ROTC, and our Saviour’s Lutheran Church. Chances are, you’ve driven down one of the roads he lovingly and proudly built to safely connect you to your neighbors; so smile next time you’re out and about in the beautiful states of Wyoming and Colorado. When he wasn’t working, Bill was the most amazing husband, father, grandfather, and great-grandfather you could hope for. There was nothing he wouldn’t to see his loved ones happy, and he did it all genuinely and with boundless energy. It was once remarked that “it just wasn’t a good day for Bill unless he had a couple hundred miles under his belt.” He also loved golfing, hunting, skiing and watching sports with a Fat Tire in hand – especially he CSU Rams. Bill is preceded in death by his parents, Henry and Marcia Lauer. He’s survived by two brothers, James and Edwin; by his wife, Janie; and his children, Lindsey Chandler (Tom), Pam King (Rex), Maury Cuje, John Lauer (Meaghan), and Kerry Daniel (Matt); as well as 16 grandchildren; and 6 great-grandchildren. The family would like to offer their heartfelt gratitude to Fort Collins Pathways and Home Instead Senior Care for the excellent care they gave Bill. In particular, Susan, Kim, Linda and Jane. To honor Bill’s memory, his family humbly requests contributions be made to Pathways Capital Campaign Fund, 305 Carpenter Road, Ft. Collins, CO 80525. A private service for Bill’s family will be held.

The family of William "Bill" Graham Lauer created this Life Tributes page to make it easy to share your memories.