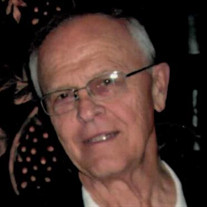 Bill Schmitt, of Fort Collins, passed away peacefully on Monday, December 11, at the Hospice Center at McKee Medical Center in Loveland, CO. Affectionately known to family and friends as “Dad,” “Pops,” “Willard,” “Coach,” “Mr. Schmitt” and “Mr. Fix-It,” Bill was 79. Elgin, Nebraska was Bill’s birthplace and childhood home. He was the youngest of Frances and Ted Schmitt’s nine children, and attended St. Boniface Catholic School. He enlisted in the U.S. Navy at 17, leaving to serve his country the day after high school graduation. Upon returning from the service, Bill earned a Bachelor’s Degree at Wayne State College, Wayne, NE, followed by a Master’s Degree at Colorado State University, Fort Collins, CO. After a long career as a physical education teacher, where he was respected and noted for helping each of his students build self-esteem, Bill retired from the Poudre School District in 1998. Upon retirement, he was excited to take on the duties of caring for his infant granddaughter, now a freshman at Colorado State University. Bill was a sportsman, who excelled at baseball (was scouted by major league teams), bowling, horseshoes, and loved fishing. He was also the ultimate sports fan, when it came to the Denver Broncos, CSU Rams and Nebraska Cornhuskers, even during the seasons that were less than stellar. Bill will be greatly missed by his many friends, fellow teachers, and the thousands of students’ lives he touched. As family was everything to Bill, life is forever changed for his wife of 55 years, Lois, his daughters Barbara and Bobbi Schmitt, son-in-law, Dave Anderson, and granddaughter, Cassandra Nichols (all of Fort Collins). A Mass to celebrate Bill’s life will take place at 2:00 p.m. on December 21, at St. John the Evangelist Catholic Church in Loveland, with a reception to follow. A memorial Mass will also be held at 10:30 a.m. on January 4, 2018, at St. John’s Catholic Church in rural Clearwater, Nebraska. In lieu of flowers, contributions in Bill’s name can be made to the Lewy Body Dementia Association at www.lbda.org.

The family of William "Bill" Richard Schmitt created this Life Tributes page to make it easy to share your memories.

Bill Schmitt, of Fort Collins, passed away peacefully on Monday,...