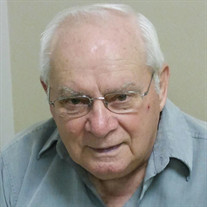 It is with tears in our eyes and heavy hearts that we share William (Bill) Volesky passed away, after battling a long illness, on Friday December 9, 2016 at his home in Fort Collins, CO. “Papa” was born on the farm in New Hradec, ND on March 30, 1933 to Joseph and Mary (Karsky) Volesky. He graduated from high school after which he joined the United States Air Force and was part of the Thunderbird air demonstration team as a mechanic. After a short time at Arizona State University, he attended Northrup Aeronautical Institute in Los Angeles, CA where he earned his A&E license. After graduation, Papa moved to Denver, CO and was hired by United Airlines as an A&E mechanic, and later, as a supervisor of aircraft maintenance. While at United, Papa met the love of his life, Marcia (Lobel) and they were married in 1962. From that union, they were blessed to have four children. Papa left United Airlines in 1973 in order to pursue his life-long dream of farming, starting in Brighton, CO. In 1979, Papa moved the family to Wellington, CO where he and Marcia bought their own dairy farm. After years of challenging and rewarding experiences alike, the family was forced to sell the farm in 1985 due to an injury Papa received in a motor vehicle accident. After moving to Fort Collins, Papa unfortunately was stricken with prostate cancer in 1999. He suffered years of declining health and serious ramifications due to the cancer treatment. He underwent multiple surgeries and procedures, remaining strong and a survivor through the years. During healthier times, Papa enjoyed rebuilding a 1931 Model A and a variety of handy man projects. He was very skilled at woodworking, building everything from shadow boxes to a library with a built in roll-top desk. He was incredibly skilled and there was never a project he was unable to master. Papa had been a member of Saint Joseph Catholic Church since 1979. He was a member of the Legion of Mary for many years and active in hospital, homebound, nursing home and jail ministries. In addition, he was a Lector and Eucharistic Minister. Papa came from a family of twelve brothers and sisters. He is survived by his wife (Marcia) of 54 years; three children: Tim, Greeley CO; Kristy (Lee), Fort Collins CO; Jay (Jennifer), Broomfield CO; six grandchildren: Paige, Rachel, Brandon, Amanda, Jenna and Brody; one great-grand-daughter: Brielle; his furry daughter: Elle; five brothers: Edwin (Irene), Dickinson ND; Tony (Bev), Dickinson ND; Al (Cele), Helena MT; Frank (Sue), Warrensburg MO; Joe, Rapid City SD; two sisters: Ella Sadowsky, Dickinson ND; Bridget (Tom) Glaser, Dickinson ND; one sister-in-law: Clara, Helena MT; two brothers-in-law: Herman Hauck, Billings MT and Ben Weigel, Bismarck ND and a herd of nieces and nephews. Papa was preceded in death by his parents, Joseph and Mary; his oldest son, Greg; two brothers: Charles and Bob; two sisters: Dorothy and Marian; two brothers-in-law: Bob Sadowsky and Ray Froehlich; three sisters-in-law: Pat, Betty and Linda. Recitation of the Rosary will be held at Saint Joseph Catholic Church, 101 N Howes Fort Collins CO at 2 pm on Friday, December 16th. A Mass of Christian Burial will follow, beginning at 2:30 pm. Services with full military honors will conclude at the church. Papa was a faithful Bronco fan, a lover of sweets and a man of virtue. He was first and foremost devoted to his family and his church. He will forever be in our midst as an inspiration, a truly amazing individual that we all aspire to emulate. Papa we love you and will miss you always.

It is with tears in our eyes and heavy hearts that we share William (Bill) Volesky passed away, after battling a long illness, on Friday December 9, 2016 at his home in Fort Collins, CO. &#8220;Papa&#8221; was born on the farm in... View Obituary & Service Information

The family of William "Bill" Volesky created this Life Tributes page to make it easy to share your memories.

It is with tears in our eyes and heavy hearts that we share William...