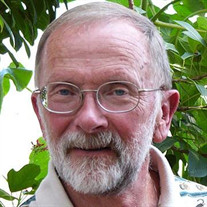 Bill Gilbert, 79, of Fort Collins, CO died September 6, 2017 at home from complications related to rheumatoid arthritis and vascular dementia. Bill was born to Frederic J. Gilbert and Florence B. Gilbert. He was raised in Hyde Park, NY and graduated from Franklin Delano Roosevelt High School and Dutchess Community College. Bill worked for IBM for many years. He was at IBM before joining the U.S. Navy where he served a two-year tour on the USS Charles R. Ware DD-865. He returned to IBM and worked in multiple locations until he retired in 1991 after 36 years. Bill married Vivian Lown in 1963 in Poughkeepsie, NY. They had two children before moving to Colorado in 1975. Initially in Loveland, CO, they spent a short time in Austin, TX and then returned to Boulder, CO. After retiring, Bill and Vivian spent 20 years in Red Feather Lakes before moving to Fort Collins. Bill served as the director of the Colorado Mountain Club Climbing School for several years. He also served as president of the Mummy Range Institute in Red Feather Lakes and was on the Red Feather Lakes Community Library board of directors. Bill was a lifelong birder and cyclist. His love of bird watching rubbed off on both of his children, and one year he put more miles on his bike than he did his car (10,000!). He inspired his daughter to become a year-round bicycle commuter and whenever she doubts whether it’s a good day to ride due to inclement weather she always remembers his words, “It builds character!” Gardening was also one of Bill’s passions that instilled character in his children. In Loveland, the family had a 50’x80’ garden that supplied the family’s vegetables each year and required lots of weeding, picking, and preserving! His love of fly-fishing encouraged both his son and grandson to become avid fishermen. In addition, Bill enjoyed bike racing, rock climbing, and woodworking throughout his life. Bill is survived by his wife of 54 years, Vivian Gilbert; son, Brian Gilbert (fiancée, Debbie Powers); daughter, Kristen Gilbert; grandchildren, Savanna Seel (husband, Peter James Seel), Haley Inman, Hannah Gilbert, and Thomas Gilbert; sisters-in-law Bonnie Gilbert, Susan Hues (husband, Joe), and Patricia Lown (partner, Lucine Barbeau); brother-in-law Paul Thomas Lown (wife, Joanne); aunt, Sabra Gilbert; and many nieces, nephews, and cousins. Also important to Bill were his extended family: Janet McLachlan, Kit and Bill Link, Yvonne and Wayne Maybe, and Sheila Johnson. Bill was preceded in death by his brother James Gilbert, his parents, grandparents, and several aunts and uncles. There will be a celebration of Bill’s life to be announced at a later date. In lieu of flowers, donations can be made to Pathways Hospice, 305 Carpenter Rd., Fort Collins, CO 80525 or to a charity of your choice.

Bill Gilbert, 79, of Fort Collins, CO died September 6, 2017 at home from complications related to rheumatoid arthritis and vascular dementia. Bill was born to Frederic J. Gilbert and Florence B. Gilbert. He was raised in Hyde Park, NY and graduated... View Obituary & Service Information

The family of William Walter Gilbert created this Life Tributes page to make it easy to share your memories.