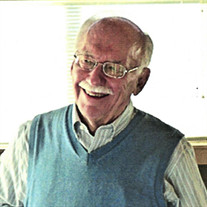 A beloved husband, father, deacon, friend, social justice advocate, and amateur magician, William Monson McClellan, passed away on July 8, 2020. He was a man of deep faith who enjoyed the simple things in life: ice cream cones, baseball games, a long walk, and always, a good book. His quiet strength, humor, and deep well of patience was deployed in raising four strong daughters, and his kindness touched everyone who crossed his path. Bill was born in Groton, Massachusetts, on January 7, 1934. After childhood and teenage years in New England, he headed west to attend Colorado College (BA 1956), where he met his love, Jane Muir. They were married in Tucson, Arizona, in September 1955. After receiving a master’s degree in library science from the University of Michigan, he was appointed the Music Librarian at the University of Colorado and then, the University of Illinois. During his 32 years at Illinois, Bill had a distinguished career which included designing a state-of-the-art music library in the 1970s. He was active in a number of professional musicological and library organizations, serving as President of the Music Library Association and Editor of the journal Notes. Bill helped mentor all those who came in touch with him – students, faculty, colleagues – who benefited from his deep knowledge of the profession as well as his commitment to the services and collections of the music library. Bill’s compassion led him to deepen his faith and service to others by pursuing a role as Deacon in the Catholic Church. He was ordained Deacon in May 1992 in the Diocese of Peoria, Illinois. In both Illinois and Colorado, Bill focused his ministry on social justice. In Illinois, he was involved with the ecumenical Cursillo program, Christ Renews His Parish Program, and at St. Jude’s Catholic Worker House. In Ft. Collins, Bill was active in the Interfaith Council, volunteered at the Day Shelter, advocated for affordable housing, brought the Just Faith Ministries to Northern Colorado, and was part of a core group to establish a L’Arche community for people with intellectual disabilities. He also created the first library at St. John XXIII. For Bill, everything essential leads to matters of the heart. A quote that resonated with him from Henri Nouwen: “It is not so much the ability to think, to reflect, to plan, or to produce that makes us different from the rest of creation, but the ability to trust. It is the heart that makes us truly human. . . the central place of the mystical experience in human life.” He was dearly loved by his wife, Jane (65 years of marriage); daughters: Jennifer Pfiester (James), Anne McKinzey (Joel), Meg McClellan (Jim Barlow), Amy McClellan (Jeff Faunce); seven grandchildren, three great-grandchildren and his sister, Marjorie Feeney. A private mass for family will be held at 10:30 am, Wednesday, July 15th and will be streamed online at https://youtube.com/c/SaintJosephCatholicChurchFC A celebration of his life will follow after the pandemic. In lieu of flowers, memorial contributions may be made in Bill’s memory to the Friends of L’Arche of Northern Colorado at https://friendsoflarchefc.org [719 Fir Place, Loveland, CO 80538] or c/o Goes Funeral Care.

The family of William Monson McClellan created this Life Tributes page to make it easy to share your memories.