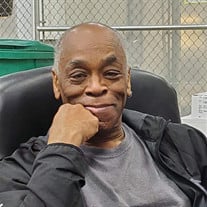 William Tyrone Pratt was born in Brooklyn, New York on June 1, 1948. “Tye,” as everyone knew him, was raised by his mother, Macie. As a boy growing up in the big city, Tye used to play in the streets: uncapping fire hydrants to cool off in the summer, pounding the pavements of street basketball courts, and jumping the roofs of buildings, in all the invincibility of adolescence. Tye took his first job at age 11, working in a local paint store. But he remained a mischievous boy and kept his mom very busy. When the Vietnam War escalated in ‘66, Tye, then a young man, enlisted along with a cousin in the US Air Force. Tye went to boot camp in Texas and was later deployed to Vietnam to serve his country. He served two years and four months in the Strategic Air Command unit, until he was injured. The Air Force then sent him home, landing him in California for a short time. Tye later transferred to Warren Air Force Base in Cheyenne, Wyoming for final recovery, where he discharged at the rank of Senior Airman. It was at that time that Tye discovered the quaint college town of Fort Collins, Colorado, where he would find happiness and his forever home. While he did go back to New York City for a few months, per his mom’s wishes, he found that the city was just no longer in him, and he returned home to Colorado and the mountains that he loved. In those early days in Colorado, Tye worked at the Charco Broiler restaurant, first as a dishwasher and later as a cook. Wanting more out of life, he then found work at Teledyne WaterPik, learning everything he could about shipping and receiving and warehousing. Tye excelled in this line of work and would later go on to work at Vipont Pharmaceuticals, LSI Logic, and General Electric/Baker Hughes, in Northern Colorado. Tye finally retired on January 14, 2022, after over forty years in logistics. Tye was an avid sports fan and loved all the professional Colorado sports teams. He never missed a game for the Denver Broncos or the Denver Nuggets. He spent many a summer afternoon watching the Colorado Rockies baseball games, too. Besides sports, Tye loved his music. He was known to have the house or car bumping with the bass boosted on his favorite songs—lately, from the Heart and Soul station on Sirius XM Radio. When he had free time, Tye also enjoyed spending time with his closest friends. On a hot summer day, he was happiest just sitting around with his buddies, laughing and joking over a cold beer. Tye fell ill with covid in December 2020, landing him a long stay in the hospital. He fought the odds and beat covid but developed a heart condition from the illness. As big as his heart was, the fight took too much of a toll in the end, and he left us to be with the Lord on February 28, 2022. His family is especially thankful for the team of doctors who helped him in this last year as he fought the aftermath of covid: Doctors Nilesh Ahuja, Stace Fritzler, James Hoyt, Miho Scott and Todd Whitsitt. With their attentive and compassionate care, we were fortunate to share another year with Tye. Tye leaves behind his wife, DeAnna Pratt; daughters, Tyne Pratt and Kira Pratt; and granddaughter, Johnna. He was immensely proud of both of his daughters, and he was absolutely tickled that he had gotten to become a ‘grandpa’. Tye was cool; he was a quiet, but warm and charismatic soul. He was a loving father and husband, and he will be missed greatly. A celebration of Tye's life will be held Sunday, March 13, 2022, from 1:00 - 3:00 pm at Windsong Estate Event Center, 2901 Saddler Blvd., Severance, CO, 80524.

William Tyrone Pratt was born in Brooklyn, New York on June 1, 1948. &#8220;Tye,&#8221; as everyone knew him, was raised by his mother, Macie. As a boy growing up in the big city, Tye used to play in the streets: uncapping fire hydrants to cool... View Obituary & Service Information

The family of William "Tye" Pratt Jr. created this Life Tributes page to make it easy to share your memories.