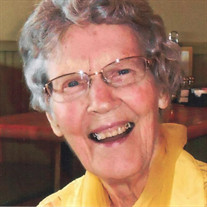 Zelina Alyce Hickox departed this earth to be with her Savior in heaven on July 19, 2020. She was born May 3, 1928 in Lawrence, Kansas, the only child of Elmer and Laura Higginbottom. Though she grew up during the Great Depression, she never lacked materially as her loving parents provided for her by working odd jobs, taking in roomers and carefully managing money. During her high school years, Zelina worked at the Lawrence Public Library on Saturday evenings at a rate of $.25 per hour! Graduating from Liberty Memorial High School in Lawrence in 1946, she went on to obtain a Bachelor of Arts in Math and Secondary Education from the University of Kansas in 1950. Zelina was a lifelong, loyal KU Jayhawk alum. Zelina married her high school sweetheart, Max Dwayne Hickox, on April 8, 1950 in the beautiful Danforth Chapel on the KU campus. She worked at KU’s library during her college years and also after graduation while Max was deployed by the US Army to Korea. Zelina and Max lived in Lawrence until 1956 when Max took a job in Denver and there they raised their three children, Keith, Miriam and Laurie. Zelina’s parents followed them to Denver shortly thereafter. In 1958 as her children were starting school, Zelina began work as a substitute kindergarten teacher in Thornton, Colorado. Finding the teaching profession to be enjoyable, she gained fulltime employment as a kindergarten teacher, primarily with Adams County District 50 schools until her retirement in 1988. While doing a marvelous job of raising a family and working fulltime, she went back to college for evening classes and summer coursework to complete her Master of Arts degree in Elementary Education at Colorado State College (now the University of Northern Colorado) in 1967. Zelina loved to invest her time in her church, various sororities, alumni groups and associations, often serving on committees and holding officer positions, sometimes with the title of president. She was a lifelong member of Sigma Kappa Sorority, beginning in her college years. Other affiliations in this regard include the Denver Panhellenic Council, Westminster Retired School Employees, and Alpha Delta Kappa (retired teachers’ sorority). Following retirement, she volunteered at Set Free Prison Ministries in Lakewood, Colorado, grading Bible correspondence courses and doing computer data entry. She faithfully attended Southwest Bible Chapel (now Lakewood Bible Chapel) for many years, maintaining a host of close friendships there throughout that time. She supported missionaries, was a pianist, a supporter of the arts, and enthusiastic about attending symphony and choir concerts. A full social calendar was Zelina’s passion as was her desire to make new friends while treasuring relationships with those gained through the years. The length of her Christmas card mailing list is legendary and she was religious in remembering birthdays and anniversaries with cards and gifts. While residing in Westminster and Arvada, Zelina and Max cultivated close relationships with their neighbors and were an integral part of “The Gang”, a social group of couples of similar age and shared interests such as dinners, card games, and camping. Zelina and Max loved the Colorado Rockies and spent many weekends camping in a variety of campers and trailers over many years. Max’s philatelic interests kept them on the road attending stamp shows in several states when they weren’t enjoying time with family. Travel also took them to a large number of U.S. states and Canadian provinces. After retirement, they were able to expand their adventures, visiting Sweden, England, Germany, Austria, Liechtenstein and Switzerland, primarily pursuing journeys related to family genealogy. After Max passed away in 2007, Zelina moved from Arvada, Colorado to Fort Collins, to be near her children, grandchildren and their extended families. As would be expected, she immediately made friends at her new church, her Bible study, her neighborhood, the local ADK chapter, and Horizons, a support group for widows. Family holiday gatherings were a high point on her calendar. Her planner always filled quickly with social events and remained that way until the end. A special bond of friendship was forged with her daughter’s mother-in law, Bernie Fuller, during her Fort Collins years. In summary, all of Zelina’s involvements in life centered on two things: her love for her Lord Jesus, and her love for people. Even in her last months when she was in assisted living, she quickly became known as the “lovebug” because she loved everyone there and they loved her. Zelina was preceded in death by her parents and her husband. She is survived by three children, Keith (Debbie) Hickox of Severance, CO, Miriam (Steve) Schoenig of Fort Collins, CO and Laura (Kenton) Fuller, also of Fort Collins. She is also survived by seven grandchildren and thirteen great grandchildren, all of whom she adored. Her devotion to God influenced all their lives, and they will miss her greatly as will a host of friends who now mourn her passing. A private memorial service will by held July 24, 2020 at 5:30 p.m. Please follow this link for the recorded service: https://www.youtube.com/watch?v=GcGAxNzyxjc&feature=youtu.be Interment will be at Olinger Crown Hill Cemetery in Wheatridge, Colorado with a private graveside service. Memorial gifts may be sent to Camp Elim at https://www.campelim.com or to Set Free Prison Ministries, P.O. Box 19760, Denver, CO 80219-0760.

Zelina Alyce Hickox departed this earth to be with her Savior in heaven on July 19, 2020. She was born May 3, 1928 in Lawrence, Kansas, the only child of Elmer and Laura Higginbottom. Though she grew up during the Great Depression, she never... View Obituary & Service Information

The family of Zelina Alyce Hickox created this Life Tributes page to make it easy to share your memories.

Zelina Alyce Hickox departed this earth to be with her Savior...