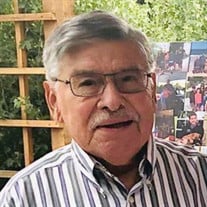 On December 20, Orlando Augusto Ortiz passed away at home in Fort Collins, Colorado at the age of 87. Orlando was born in El Salvador to Josefina and Eduvigis Ortiz. He learned to speak English as well as his native Spanish at a young age and would often tell stories of his father teaching him math at home prior to starting his formal education. At the age of 19, Orlando was sponsored by his older brother Moises, and immigrated to the United States (San Francisco, California). He then enrolled in the United States Army, and although admittedly out of his element, he excelled and saw it as a way to contribute to his new country as well as to help him continue his education. Orlando graduated San Francisco State University and found his passion and niche during his career in human resources. He was respected by peers and colleagues and continued to work well beyond retirement. His career and change in employment took him from San Francisco to Los Angeles, eventually purchasing a home in Yorba Linda, California where he resided for over 30 years. He married in 1979 and had a daughter to whom he was a doting father. Orlando was very active in the Catholic Church, namely St. Martin De Porres in Yorba Linda. A passion of Orlando’s was music; he was very involved in the church choir and performed for the Pope during the Pope’s visit to California in 1987. Orlando moved to Rapid City, South Dakota, for several years and made a large circle of friends and found joy in a climate that was the opposite of where he spent most of his life. He made his final move to Fort Collins, Colorado in 2017. Orlando was an avid tennis player, alternating tennis games with trips to the gym, until his second, major stroke in May 2021. He had a wonderful sense of humor and a certain way with people; he took interest in others’ work and hobbies and continually wanted to help them pursue their passions. Orlando had wanted to practice law, and although that didn’t come to fruition, he continued his interest in politics throughout his life and kept up to date on current events and happenings. He didn’t hesitate to engage in spirited conversations and write opinion letters to the local newspapers or directly to politicians; he had many columns published and upheld his views and beliefs. Prior to his major stroke and the pandemic, he loved to travel and spent time visiting Europe and more recently made annual trips to see family in Costa Rica as well as a final trip to his place of birth, El Salvador, in November of 2019. Orlando is survived by his daughter, Vanessa Ortiz-Konopka (Fort Collins), son-in-law Matthew Konopka (Fort Collins), his ex-wife, Ellen Lowry (Fort Collins) as well as his granddaughter, Kyra Lowry (Denver). Orlando was predeceased by siblings: Moises Ortiz, Carlos Alberto Ortiz, Julio Antonio Ortiz, Oscar Armando Ortiz, Bely Astrid Ortiz (Herrera) and Gloria Josefina Ortiz (Cedillos). Orlando was a beloved father, and a cherished friend, son, brother, uncle, and cousin. He will be missed by many. A celebration of life will be held in August 2022.

On December 20, Orlando Augusto Ortiz passed away at home in Fort Collins, Colorado at the age of 87. Orlando was born in El Salvador to Josefina and Eduvigis Ortiz. He learned to speak English as well as his native Spanish at a young age and... View Obituary & Service Information

The family of Orlando Augusto Ortiz created this Life Tributes page to make it easy to share your memories.

On December 20, Orlando Augusto Ortiz passed away at home in...